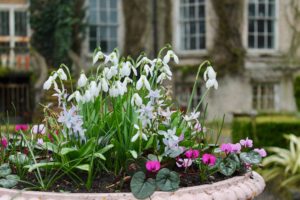 Over the years I have admired these dainty little white pops of colour poking through the mucky winter ground. At home, our snowdrops peep out from under the beech hedge and as we come and go, the cleanness of these clusters gives me hope that the longer, brighter evenings will soon be with us. They are obviously a resilient lot too which makes me smile as they shine through the January darkness! 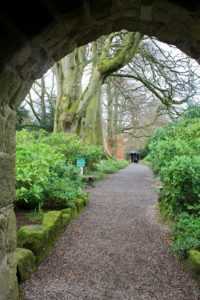 As you enter the gardens at Altamont

Close by to us, we are lucky to have many “Snowdrop walks” in country house gardens. I had heard about Altamont Gardens and so, last year we visited for the first time. It was such a well-worthwhile experience, I made a point of re-visiting this year to learn more about the pluirín sneachta. 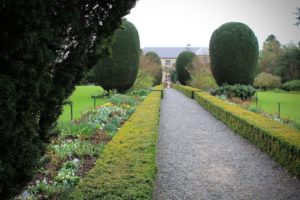 Facing Altamont House from the Broad Walk. On either side are box hedging & Yew trees that are more than 150 years old. Snowdrops are planted alongside many varieties of Roses in these beds.

Before visiting Altamont, I thought – very ignorantly – that a snowdrop was a snowdrop, is a snowdrop and nothing more to it! Not so!!

As you walk through the gardens here, snowdrop patches will be identified and named. With varieties growing so closely together you will see a big difference between flowers. Some will be big and fat, others tall and skinny, others will have green on the outer leaves and others will have double centres. 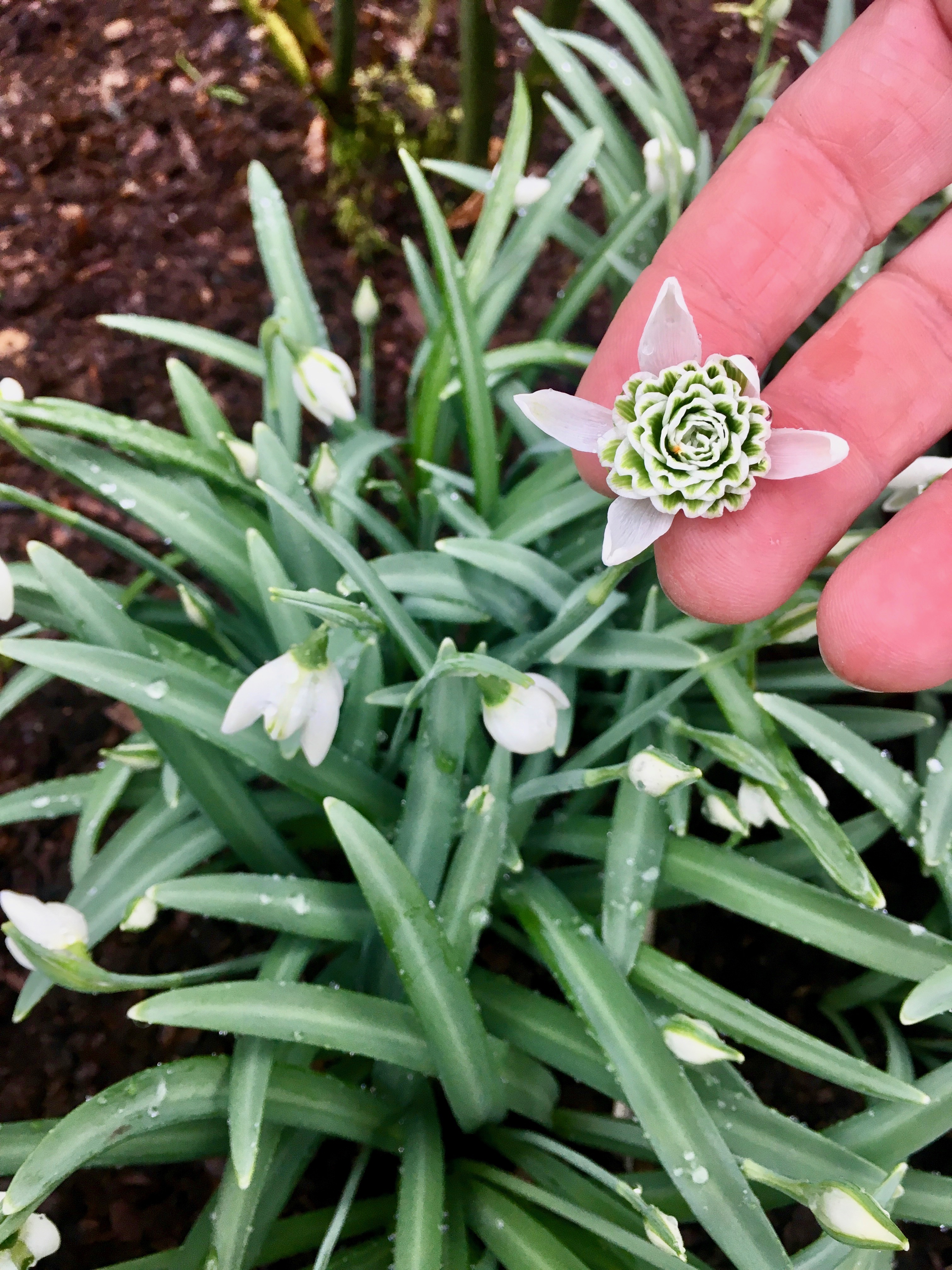 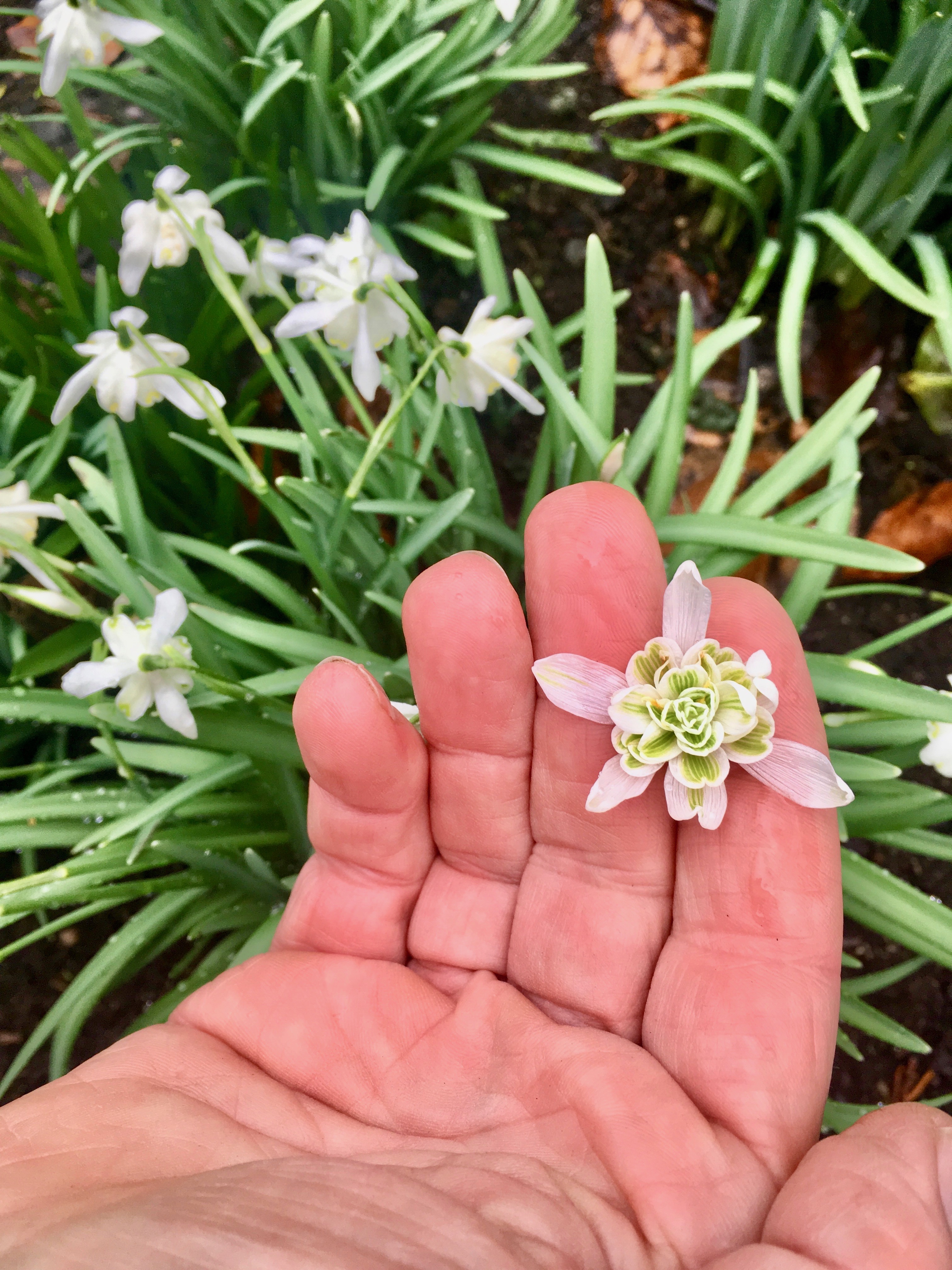 Similar but a different colour, the Flore-pleno 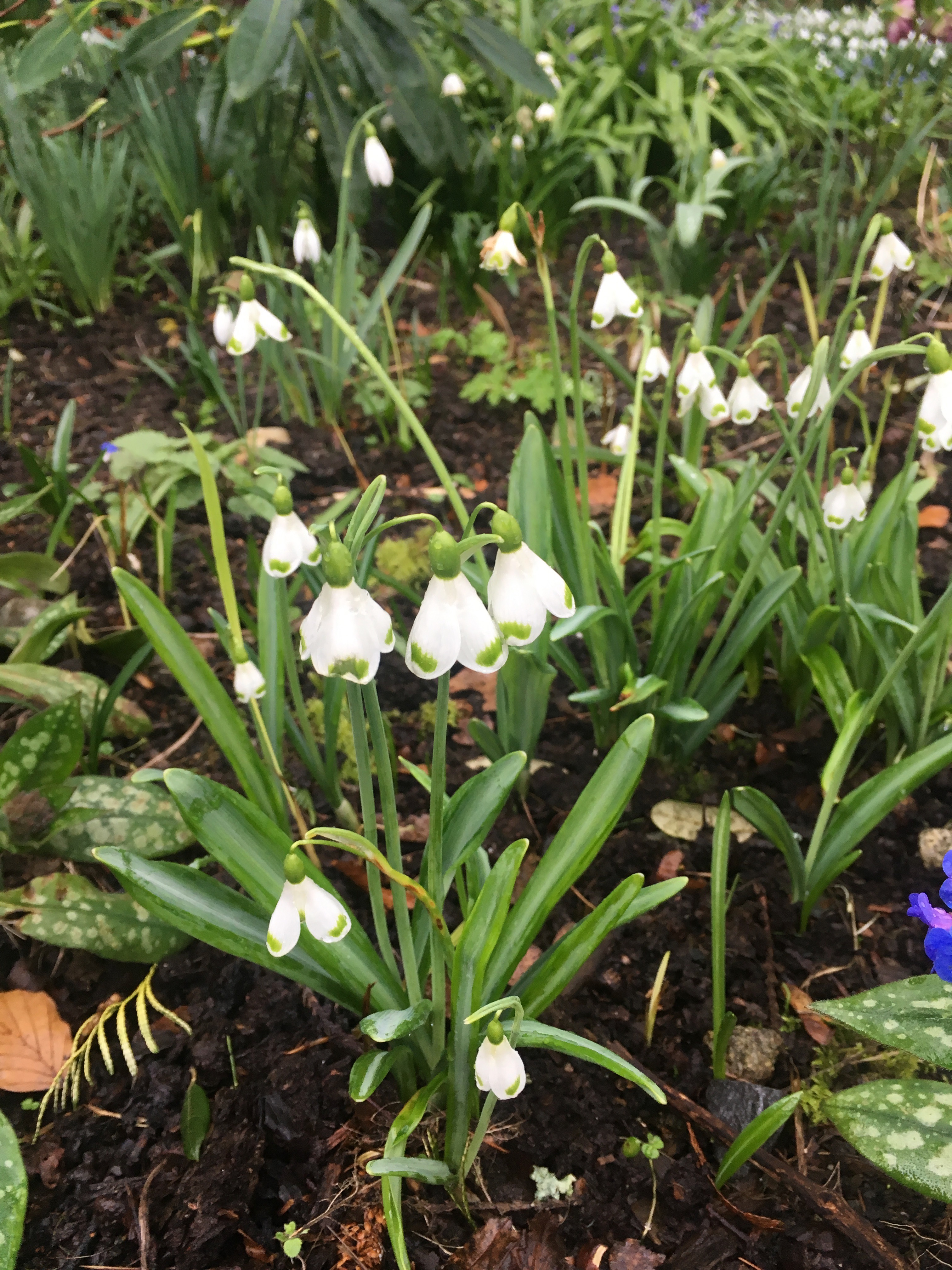 The head gardener, Paul runs tours during Snowdrop Month where you can learn more about these little flowers. So if you have a curiosity about snowdrops at all, Altamont is a great place to begin learning. I have found in other gardens, while they are lovely to visit and to see the swathes of white throughout the gardens, Altamont is more structured towards informing and educating. This is probably got to do with the grounds being owned by the State and operated by the O.P.W. – by the way, there is no charge to visit the gardens, but 2€ carpark fee. 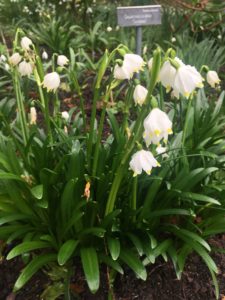 Is this a snowdrop? No! It is a snowflake!

On the two occasions I have visited, it has been a dirty, misty, drizzly February day. While we needed to keep moving and to be well dressed for the weather to stay warm, the magnificent old trees and shrubbery gave us shelter and the brightness of colour from the early spring flowers really jumped out against the grey sky. The boys running around the garden on their mid-term break didn’t seem to notice the rain with their jackets swinging in every direction as they ran and the ducks were the only ones in the grounds who seemed to not be in search of shelter as they swam around the lake, with one lady letting an eager gentleman know now was not the time for his persistent advances!

While I have only just visited in springtime, walking out towards the Temple of the Four Winds, I walked under the bare pergola with some baby daffodils emerging on either side. If you are like me and experience “Wisteria Hysteria” you may like to revisit later in the year to have the perfect Intagrammable shot of the climber in full bloom! 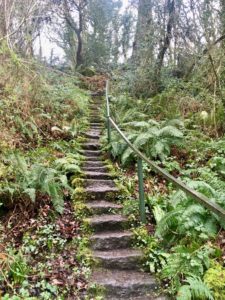 If you have sturdy boots on and wish to stretch your legs, you may like to walk up to the Temple and down the 100 hand-carved granite steps to walk along the banks of the River Slaney. Coming back up along towards the garden, I walked over the small but full-flowing waterfall and through the Ice Age glen which felt like I was in another world; the deep moss growing up the tree trunks, sounds of the stream and stepping through the path picked out through the rounded boulders. 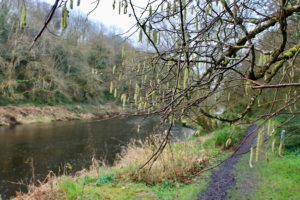 Sheltering under the catkins from the rain!

This then leads into the Bog Garden… maybe it was the damp weather and the springtime bird song, but it felt nothing like a bog to me, more like a lush tropical jungle. Only thanks be to God I didn’t have to be on high alert for tropical creepy-crawlies! The birds here were singing their hearts out and even though the water slowly trickled by, there was such a sense of stillness. 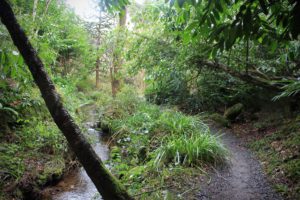 This photo really does nothing for the atmosphere of this magical spot!

Coming back into the garden, Paul very kindly pointed out differences in snowdrop varieties. When Corona North, the last private owner of the estate died in 1999, there were 35 named varieties in the garden. Altamont now has over 100 different varieties, with over 2,000 named snowdrops currently. While there are now such a large number of named snowdrops, I was curious to learn if they are native to Ireland. The Plicatus snowdrop is thought to have been collected by soldiers and carried home from the Crimean war. The noticeably bigger Elwesii are native to Mediterranean woodlands around Bulgaria, Greece & Turkey. Paul pointed out the Hill-Poë which has a dark green & white perfectly formed double centre which is believed to be native to Ireland. Galanthus is the gardening pre-fix given to snowdrops and this roughly translates from the Greek Gala = Milk and thus = flower, so Milk Flower. 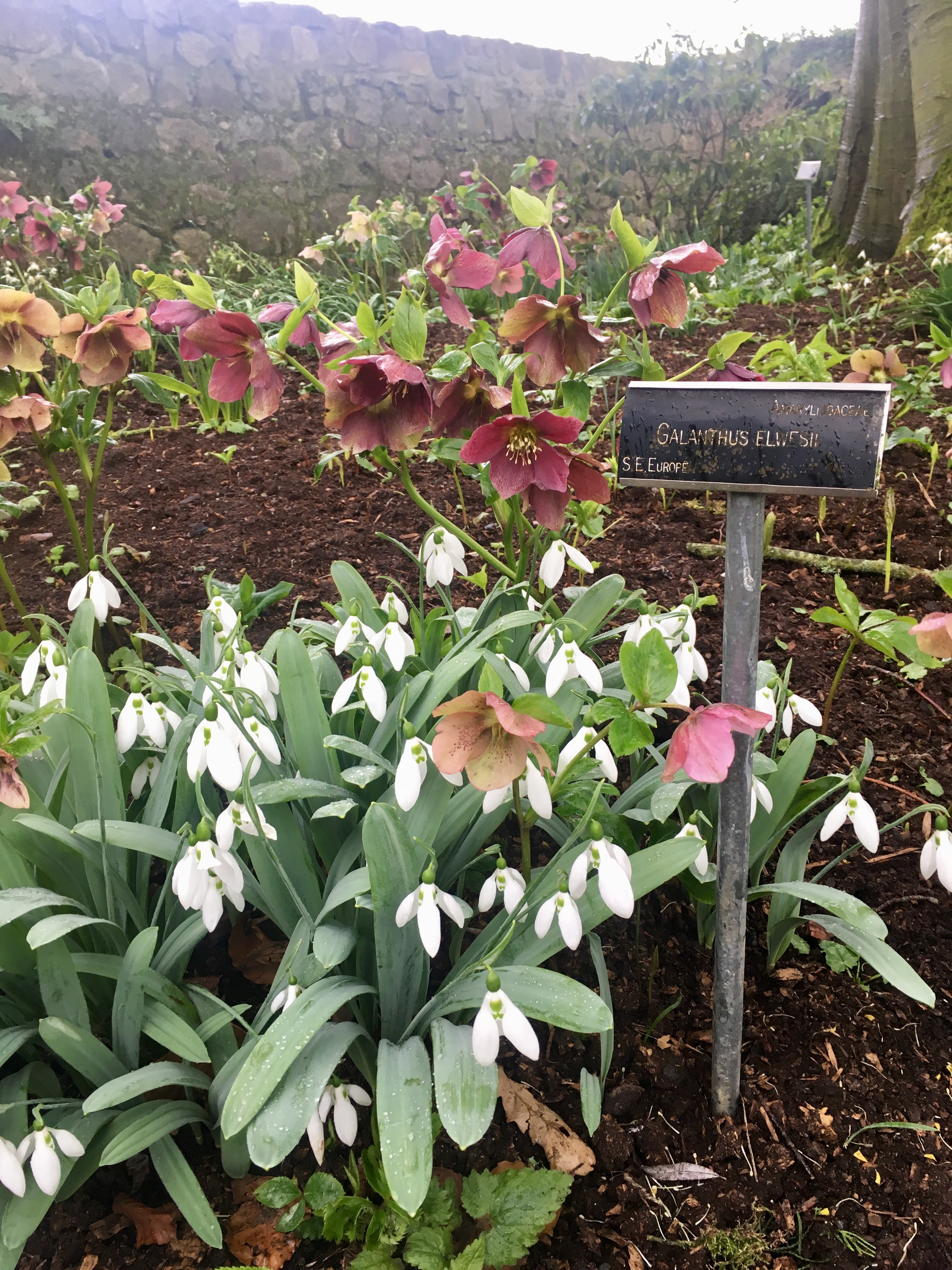 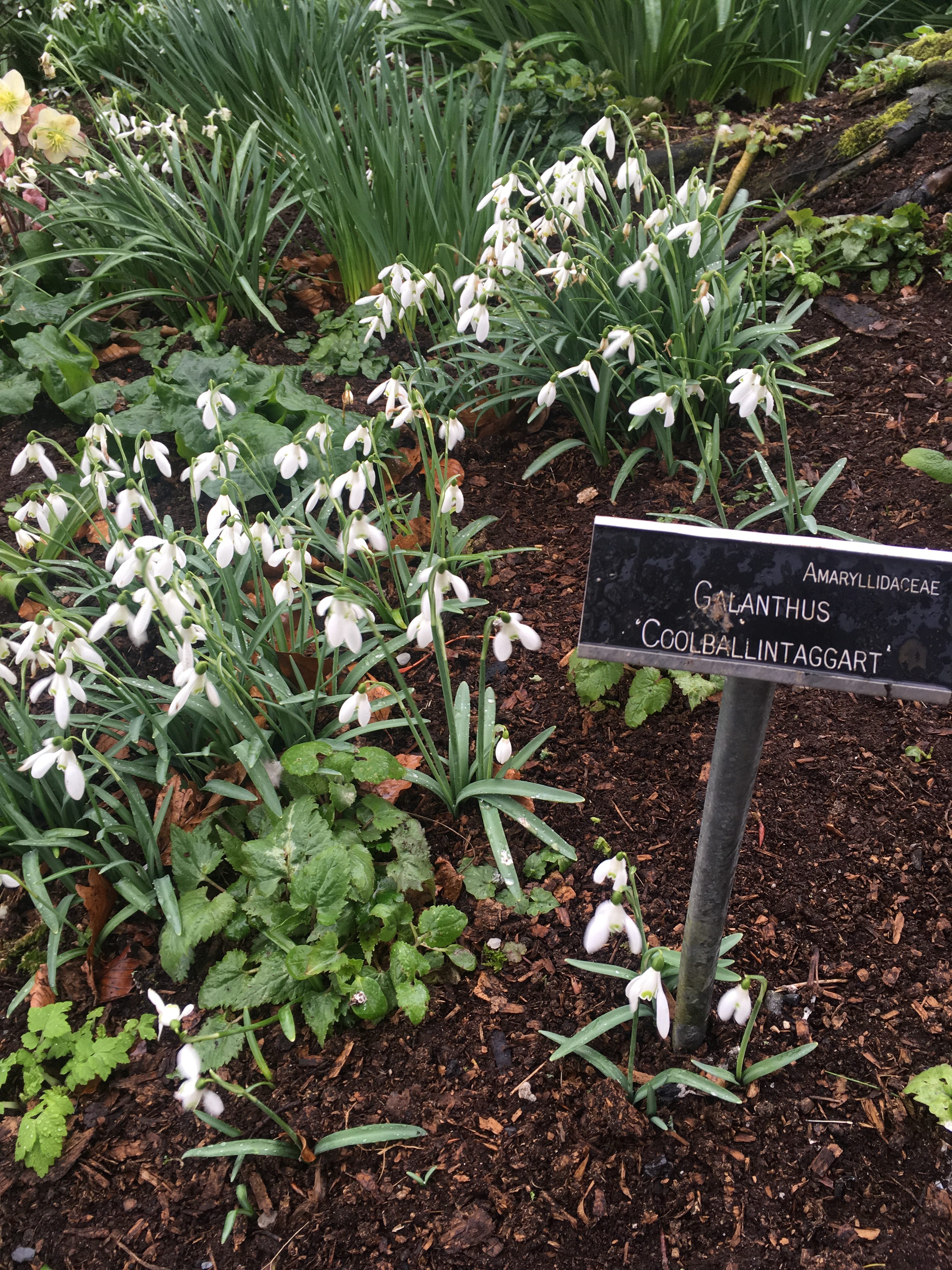 Coolballintaggart – A hybrid of other snowdrops.

If you wish to grow some snowdrops at home or would like to take home a souvenir, there is a well-stocked shop with very knowledgable staff who are more than willing to share their knowledge of the plants that call Altamont home.

Before we left, we joined the crowd around the pond and became absorbed watching the resident frogs hop through the frog spawn! They had an audience of paparazzi recording their antics and this year when I returned I was eager to see if they were still there! While there was plenty of frog spawn, I could not hear or see any frogs!! 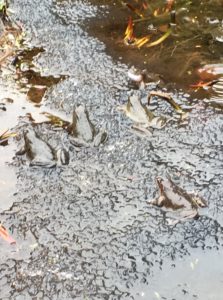