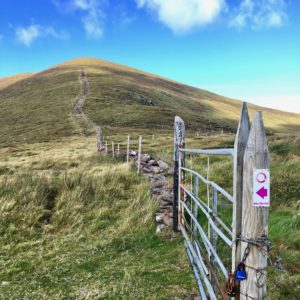 Bolus had been on my hit-list for 3 years before I eventually bagged it this August! Between weather and time, a walk up around this headland on the south westerly tip of Ballinskelligs had eluded me, and when I did get to do it, it was so worth the wait!

As you come from St. Finian’s Bay back towards Ballinskelligs on the Skellig Ring, there will be a brown National Looped Walk road sign for Bolus Head veering to your right. Continue along this road, and go easy because despite its narrow size, this road is kept busy with walkers and cars going up & down to either do the walk too or to see the site of the memorial of the American Liberator which crashed near Little Skellig in 1944, bringing with her all souls on board. It is at this monument that there is a small carpark with an information board for this walk. 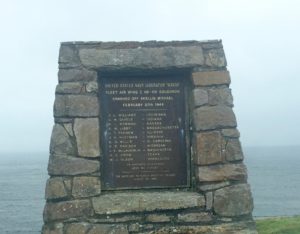 Memorial to the American Liberator, 1944. 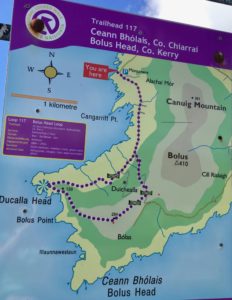 As I came straight from work, it was almost 6pm when I parked the car and met a lovely couple from Cork (where else?) who were just after completing the loop. Conscious of time, I asked them for their opinion and I got a tip to do the walk in reverse order to the map, with complete trust in their advice I trotted off up the hill. The reason being, that to do the walk according to the route guide would take a lot longer & if I took a straight run up the hill, then if the weather turned (& I was on my own) it would be alot more sheltered and quick to get back down.  I was up to the crest of the hill in 10 minutes. Oh yes, I should mention here that at the crest of the hill, to the left is Bolus mountain top itself and it is to the right that the looped walk goes – towards Bolus barracks – and it is in this direction that I was heading. I would’ve preferred to just turn left and get the mountain top in but as I was on my own and did not know the land owner I thought I better do the right thing…unusually for me!

Taking a breather on the top!

So there I was coming up towards the barracks, taking photos and just being generally thrilled with where I was, when this man came down the hill and we got chatting. He wasn’t in the mood for dilly-dalliying because he told me he was going to go up the hill and pointed to the left! Where I had wanted to go! I was delighted and straight away invited myself along!! O my god. It was like going for a walk with my father – I couldn’t keep up with him! He gave up talking to me as we started climbing because he could already hear me huffing and puffing behind him. I didn’t get much of a chance to have a look around & take in the scenery on the way up or down because we were walking at such a rate but when we got to the top he eased off and I had time to catch my breath and see Ballinskelligs Bay from a whole new angle. I could tell you that it was amazing, incredible and awesome but I could also tell you that there was absloute silence because the two of us were totally suckered in by the views around us. Seeing Emlagh strand, the golf links, Lough Currane, Hogs head, Scarriff & Deenish islands and across towards Beara was well worth the sprint up!

We set off back down the hill and met his lovely wife and daughter who had been doing the walk at their own pace and they assured me that I had plenty of time to complete the full loop so again, off I went, this time at a little slower pace and stopping to take in the views of the Skellig Rocks with the sun setting behind them. 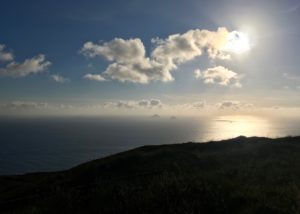 As I walked down the trail I remembered the Cork couple I had met earlier and how right they were, by doing the walk in the reverse order, I had had a steep but short up-hill climb to begin,  but then a gradual meander downhill along the cliffs and being able to enjoy the views all around as I walked down. 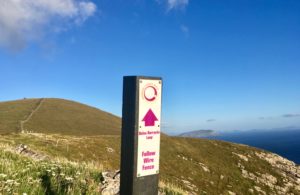 I made it back to my car in the time my walking companion had predicted – 45 minutes and I just thought, how things that are for you will never pass you by! After waiting for 3 years, I eventually had the most magnificent conditions to enjoy Bolus and met very nice and knowledgeable people along the way!

Another favourite headland walk in Co. Kerry is Bray Head on Valentia. Both have magnificent views of the Skellig Rocks but I’ll leave it up to you to decide what one you would like to go up first!