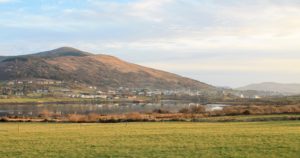 Sunsetting over Cahersiveen town at the foot of Beentee mountain

My first encounter with Cahersiveen was almost 4 years ago when the local secondary school, Coláiste na Sceilge attended the cookery school I was working in. You couldn’t but remark on the great attitude from all the students & it was clear throughout the day the happy & relaxed relationship they had with their teachers. It was thanks to kind words of encouragement from this school’s S.N.A that I plucked up the courage to seek work in The Kingdom. There’s the Kerry get-up-and-go for you!

I had been guilty of passing through Cahersiveen thinking there was more to see & do in the surrounding areas of this market town. Earlier this year when the opportunity to stay a few weeks locally came up, I took it. It has really opened my eyes to a part of the Ring of Kerry that seems to get overlooked, despite being an area of outstanding natural beauty with a proud & rich history. 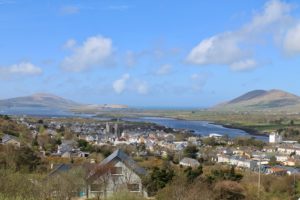 So what was it about Cahersiveen that touched me?

In one word, it’s authentic. Park in any of the central car parks in town & take a wander. People will acknowledge you as they meet you coming out of the post office/church/shops like you are one of them. I reckon it’s a good thing that Cahersiveen has remained under the radar of the diddly-eye, Aran jumper shops!!

Que up in Centra & you are included in the chat about who won the local lotto down in Frank’s last night. Go into the library for a book on the area & come out with an invitation to go hill walking at the weekend. Get your few messages in Super Valu & hear the weather forecast for the evening ahead, along with what time the under 10’s match is starting at. Go to mass & hear the news on the way out afterwards –  they don’t care that you are standing out a mile as a blow-in; they are accepting you as if you are one of their own. And that, in my wee opinion is very, very, very rare & welcoming.

Sheltered in at the foot of Beentee mountain between where the river Fertha estuary joins Valentia Harbour, Cahersiveen runs along the main street, which is the N70/Ring of Kerry road with businesses & houses filtering off on both sides. Head west & you are minutes from some of the most spectacular sunsets off Valentia & Ballinskelligs. Heading back east, you’ll be under the shadow of Knocknatobar before the road opens out towards the Ballaghisheen Pass inland or across the water to the Dingle Peninsula. 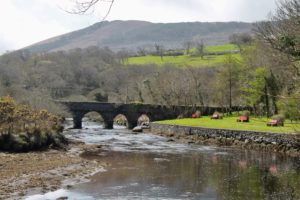 The park at Carhan, next to Daniel O’Connell’s home place.

If your time here is as short as a quick stop for coffee, you have 3 lovely cafes all dotted together on Main Street. I still dream about Cafésiveens morning coffee & scone treat! Petit Delice across the road has these amazing roast vegetable & béchemal toasties & crispy, chewy baguettes made fresh in their Killarney bakery every morning. Next door at Espresso, there are apple strudel pastries that would give any German master baker a run for his money!

But don’t just get back into the car & head on again! Just steps away in the grounds of the Daniel O’ Connell memorial church is the burial place of Monsignor Hugh O’ Flaherty who co-ordinated places of safe refuge for more than 6,500 jews & prisoners of war around Rome throughout World War II. His story is simply fascinating & I could go on about this, but you could read a little more accurately here:  http://www.hughoflaherty.com/index.cfm/page/home

And then you could get distracted by taking a wander around the shops – Fernini with the beautiful Kerry Fuschia jewellery, the Aquarian health food store & the fab gift shop next door, the antiques shop & Quinlan’s fish shop with the BEST crab in the world!!! 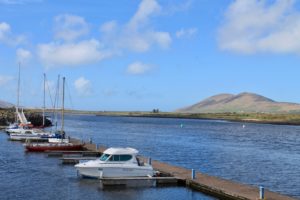 If you can stay for a walk, there are lots of scenic spots around the town. Less than 5 minutes away, take a stroll down to the marina. It is sheltered & has beautiful views across the water to Ballycarbery Castle & up towards the Heritage Centre. With 12metre berths, Cahersiveen is a well-serviced, scenic, quiet & peaceful marina to spend a few days in the summer months. 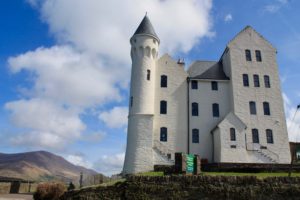 Further along the water, the Old Barracks may catch your eye! The story goes that while this was built originally as the barracks to protect the cable station on Valentia Island at the time of the British empire, the plans may have been mixed up with those of a building in Punjab! Having been destroyed by fire in 1922, the entire building was restored & today is home to the Heritage Centre. As I am easily distracted by the scenery all around, I’ve promised myself that next time I’m down, I’ll pay a visit here! 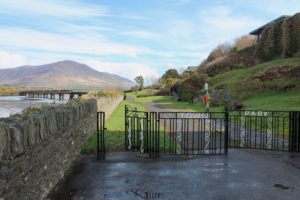 At the back of the old barracks are the gates to the town park. Walking through here, you’ll get a better look at the old railway that brought holidaymakers to the area & connected the people of west Kerry with Farranfore from the mid-1800’s until about the 1950’s. With the river Fertha meeting the waters of Valentia harbour here, you may spot a seal lurking about near the sea line waiting to catch his dinner. 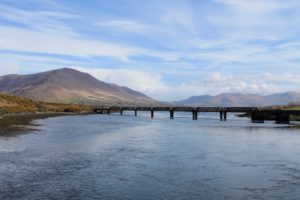 As you walk along here you may notice a sign for the towns looped walk. Pick this up & you’ll get a better feel for the town; Knocknatobar will be in your view & just before you cross the road, you will pass by Eammon O’ Docherty’s sculpture of St. Brendan the Navigator. It is said that Brendan, who is from Kerry, discovered America 1,000 years before Colombus when he sailed across the Atlantic in his currach. 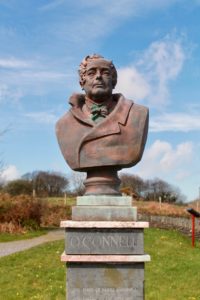 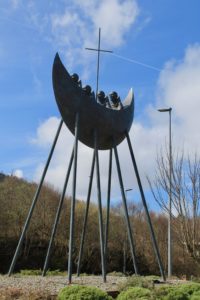 Once you cross the road, you will enter Carhan. At the far side of the river, you will see the birthplace of Daniel O’ Connell. Here, in the park is a statue detailing Daniel O’ Connell’s life & achievements, including that he went on to become the Lord Mayor of Dublin – which was new to me.

Turning back for the town along the quietest of country roads, you are enveloped in the sounds of nature; the water trickling along the hill, the birds singing & depending on the time of year – the gorse or fuschia may be brightening up the roadside.

As you make your way back into Main street, you must surely have worked up an appetite? Right across the road from the church is Camo’s. Thinking of their steak sandwich with garlic butter is making me feel so hungry as I type right now! Oh, or their fish & chips are amazing! I was tucking into this one day & the ladies next to me very proudly told me that people are known to travel from Dingle for Rory’s fish! QC’s up the street is the place to enjoy a generous portion of Quinlan’s famous crab & other freshly caught fish of the day. And if you crave some pizza, you have to try the Oratory at the western end of town. Along with the usual Margherita & pepperoni, there are 2 pizzas on the menu that raised eyebrows, but actually tasted so, so good when they arrived at the table- the blue peach & chicken tikka – that’ll be my order next time I’m back!

Summer may be the high time to visit, but I’ve experienced some lovely sunny, blue-skies days down here over winter. Many businesses remain open here through the winter, albeit with shorter opening hours.

I’ll have to wait until next summer though to re-visit O’Neill’s at the Point – a must-do if you have visions of sitting out as close to the Wild Atlantic Way as can be possible, the evening sun still heating up the patio stones, the salty seawater air meeting the garlic & seafood coming from the kitchen inside, condensation droplets on your drinks glasses, cutlery clanging & a table full of familiar faces glowing from the Kerry elements… oh please let us have another scorcher of a summer next year!! 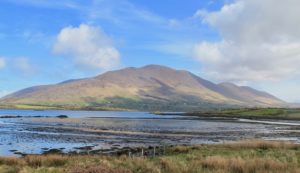 Cahersiveen may be the birthplace of Daniel O’Connell, but to get a better understanding of the man you may like to spend time at his former residence, Derrynane House, read on here: