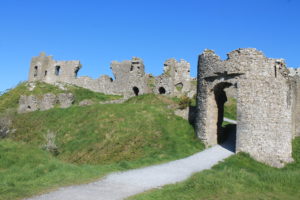 Ask any Laois person about the Rock of Dunamaise and the first thing they’ll remember is the compulsory Sunday Drive, where as many brothers, sisters & cousins could be squeezed into the back of a car. Between fighting & threats of no 99’s after, a sermon was issued on where we were going and there was to be no arguing about it because… “That’s the why”! The Rock was always popular for some reason – and I think when you see the photos you’ll see why! 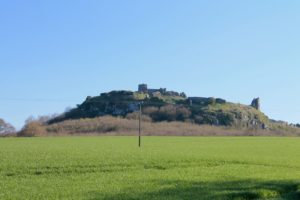 The Rock as you approach

Just over 5km from Portlaoise town, on the Stradbally road, a drive out is manageable & well worthwhile.

The information board at the entrance tells a brief history of the place. Most significantly I thought, the fortress here was built on the site of an already existing fort which dated back to the 9th Century. Experiencing invasion by the rowdy Vikings in 842, fast forward a few years to the 12th century & it was given to Aoife on the occasion of her marriage to Strongbow by her Daddy, Diarmuid McMurrough. It was then passed down through their family before a number of varied circumstances are cited. There are tales of the O’Moores pillaging the site (a local ruling clan), I’ve heard that Cromwell’s forces destroyed it, and I’ve also read that the site simply went into disrepair around the 1600’s. 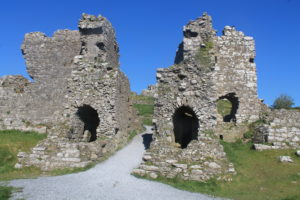 Whatever happened, the site was considered a stronghold and very well designed for defence. For some very visual descriptions of the action that took place here, have a read here: http://irisharchaeology.ie/2014/06/the-rock-of-dunamase-co-laois/. As you walk around the site & are drawn to the lookout spots, the importance of the location is understandable. Looking across the expanse of land ‘neath you, I wondered if I could I see the hill of Uisneach to the north & surely that would have been of relevance at the time? 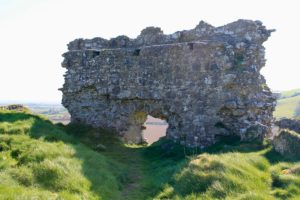 Looking towards the curtain wall protecting the fort from the outside

In the late 18th century, Sir John Parnell, who represented the Queens County (as Laois was then known) in Parliment tried to renovate the Great Hall into a banqueting lodge. You can see the decorative windows & doorways in this part of the area, along with some modern-day contributions by way of the graffiti inscriptions of true love along the smooth, weathered stone. I’m curious to learn about the red bricks used in this part of the building – when were they added? 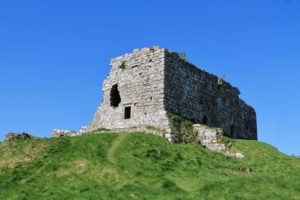 What remains of the Great Hall

Looking eastwards from the curtain wall, there are super views towards Stradbally. The Holy Trinity church is nestled on lower ground at the foot of the Fort entrance. This church dates back to the 1860’s, I believe, & it got me wondering if the efforts of Sir John Parnell to renovate the Great Hall was part of a greater plan for rejuvenating this area? 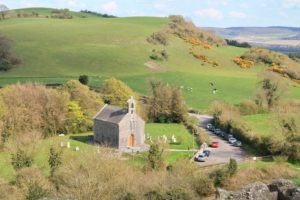 Looking down from the curtain wall towards the Holy Trinity Church

Whether you visit simply out of curiosity, or with a special interest in history & archaeology or the magnificent views, the Rock of Dunamaise is very close to the M7 motorway and is a great little spot to stop off at if you are passing through the area. 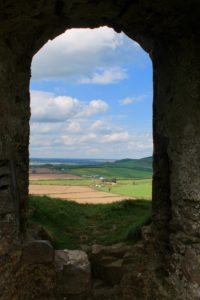 The view north from the Great Hall

Not a million miles away, is The Devils’ Bit outside Templemore in Co. Tipperary offering a similar experience – free carpark, ruins to climb through & imagine what life was like at a different time & some unbeatable views of our countryside. Read on here…