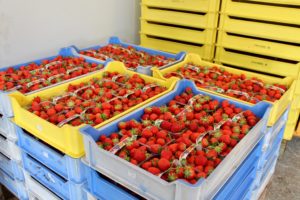 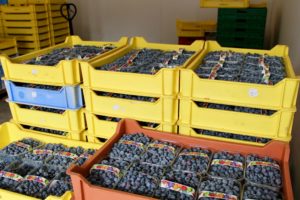 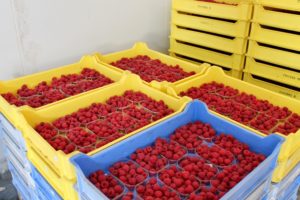 It seems to me that the majority of soft fruit sold in large supermarkets is grown & imported from Europe & often times, further afield. Luckily here in Laois between Abbeyleix & Mountrath, there is a family fruit farm growing the most delicious soft fruit, giving us customers the choice of choosing locally grown seasonal produce, which is why to me, the Phelan family are very definitely Food Heroes!

The story goes that Michael & Mary Phelan used to bring the family to Curracloe Beach in Wexford & decided that if they can grow strawberries in Wexford, sure why not give it a go themselves in Laois! That was in 1982 & since the strawberries grew so well, they gradually expanded into other fruit & today have over 10 acres of land growing – wait for it – Strawberries, Raspberries, Blueberries, Gooseberries, Loganberries, Cherries, Blackcurrants, Redcurrants, Plums & Rhubarb! 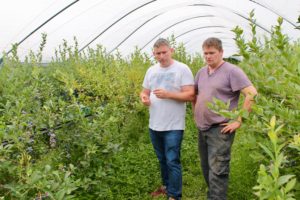 Kevin & Paul among the blueberries

More than 30 years on, the next generation are playing their part with Paul & Kevin taking care of the fruit farming, Kathryn helping out at the year-round Milk Market in Limerick every Saturday & Claire holding the fort at the Cork markets.

The Rhubarb is the first of the crops to appear in mid-March, allowed to grow naturally, not forced which means the stalks can vary between green to crimson pink. From mid-May, the strawberries are ready to be picked. The strawberry story begins in January when a mix of bareroot (meaning they have no soil attached to the root) plants & tray plants (plants potted in little plastic trays with soil on them) arrive at the farm from Europe. These are planted into grow bags & are moved into tunnels where they are tucked in under fleece & allowed to get used to their surroundings. Bigger fruit production farms may use light & gas heaters in the tunnels at this stage to trick the strawberries into thinking it is later in the year in order for an earlier arrival of fruit. Due to the significant expense this adds, Phelans are happy with the development of their berries without the use of these methods. Flowers appear late March-early April for about 2 weeks & once they fall off, they leave behind “drooplets”, which are the beginning of the fruit. Drooplets grow over 4 weeks & if all goes well, Rose Cottage strawberries will be market ready from mid-May with their early crop of Elsanta strawberries. 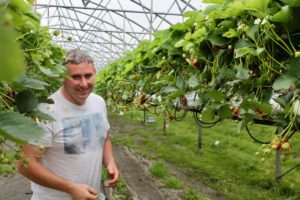 Each strawberry plant will give fruit for an average of 6 weeks. In order to keep a continuous supply of fruit over the summer, from mid-May, a number of main crop strawberry plants will be sown each week. Once the early crop is finished towards the end of June, they are then cut back & stored in tunnels over the winter to be used as the main crop for the following year.

I thought it interesting to learn the approach that is needed to take care of the plants but also to find the balance in terms of operating on a commercially viable basis. For example, while strawberry plants can produce fruit for a number of years, it may not be enough to justify the cost of maintaining them. In this case, the Phelans shred the plants & re-use them as bedding for the cattle over winter. At least they have some protection from the ever-increasing price of straw!

With so many factors affecting strawberries, if they are well looked after, they should keep producing fruit until mid-October. I had thought the glorious weather Ireland experienced this summer would have been a great boost to soft fruit but not so! The ideal weather for growing under plastic tunnels is cool & overcast, such as our more normal weather & the heat this summer created a huge spurt in growth, meaning a bounty of fruit in high summer & a shorter season as all plants have produced their fruit for the year. 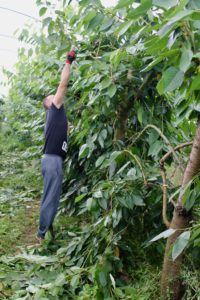 Pruning the cherry trees as soon as the fruit has finished!

With all the work of feeding, weeding, picking & clearing the strawberries, at the same time all the other fruit needs attending to too. On the day I visited, the cherries had just finished their season & staff were pruning the trees. As the trees are pruned, you can see the little buds beginning to appear, which are next years fruit. 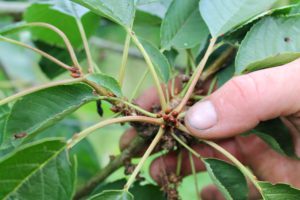 Some of the raspberries had finished for their season too & their tunnel had the plastic removed & their “haircut” too! 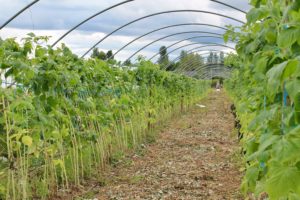 Just like the strawberries, the raspberry growing season is managed & a Scottish cultivated variety, Glenample, suits the similar climate here so there are still plenty of raspberries available! Unlike the strawberries, raspberry canes only arrive at the farm 3 months before they start fruiting, so there is risk that all plants will be successful in bearing fruit. If well looked after & the cane takes to the soil, canes will produce abundant fruit for 5-6 years. 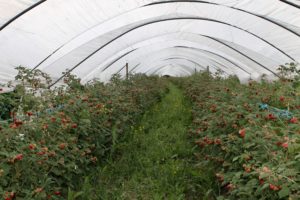 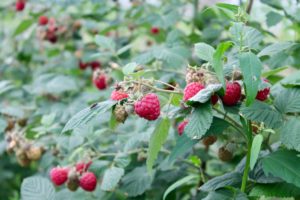 In contrast to the strawberries that involve the most work & care while growing, the raspberries are probably the easiest to manage, in fact, some varieties of raspberry have proven so vigorous that they had to remove them from the farm as they were taking over against other fruit! Once picked though, the raspberries are the most delicate of all & require extremely attentive picking, storing & transport, which is a factor in the cost of these beauties. 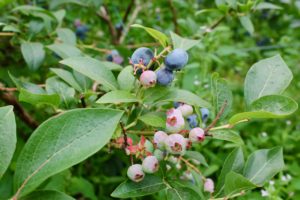 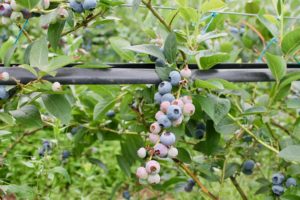 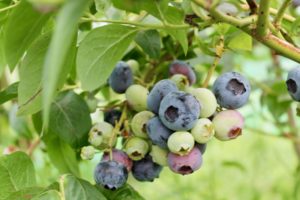 Similarly, the blueberries, need a lot of care in the early years as they arrive at the farm & need 2 years settling in before producing any fruit, but once established will produce fruit over a few decades. The blueberries here are especially great tasting & unlike anything I’ve tasted anywhere else! 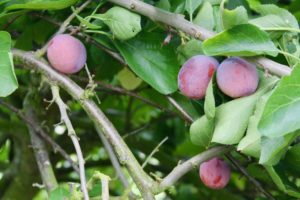 The beautiful Opal, the flavour is simply exquisite & so fragrant.

Walking through the plum trees, I was happily distracted by all the beautiful plums & could see where the Opal got its name from with its beautiful shape & shade…according to Paul & Kevin, sadly this year looks to be a poor year for plums after the challenging winter & spring weather but to me, they looked great & oh wow… the flavour was unlike any plum I ever had from a supermarket & brought me back to shaking our old plum tree & eating handfuls of them as a child! 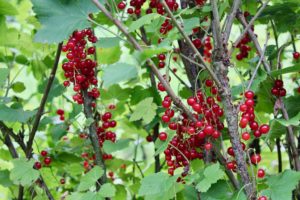 The birds may take a fancy to the blackcurrants but they leave plenty of festive looking redcurrants for us to enjoy!

Hearing from enthusiastic gardening friends the war that can be raged against birds & rabbits, I was hoping to pick up a few tricks from Phelan’s on how they protect their income! What they have noticed is the birds seem to be particularly fond of blackcurrants & so long as they keep away from the more delicate fruit, a few blackcurrants can be sacrificed instead! Other than that, the old reliable netting system seems to be the most efficient, if a little fiddly for staff to get in & out of the fruit while picking.

With all the plastic tunnels around us, I couldn’t help but wonder about the sustainability factor. The tunnels are needed to protect the fruit from our changeable weather. Each tunnel has a suggested lifespan of 3 years but again, this is weather dependent as severe elements can seriously shorten the time span. Conversely, with mild weather systems & by looking after the plastic over winter, Rose Cottage can get up to 5-6 years, after which, they are recycled in Europe. 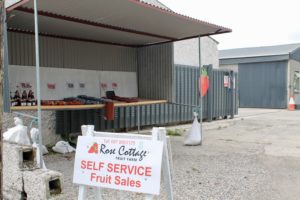 At the farm gate, the honesty box has a selection of fresh fruit, jams & juices each day.

I was thrilled when I realised we could buy cherries that are grown just a few miles from us. After I tasted the blueberries & raspberries I had to find out more! Having this family-run farm on our doorstep gives us the opportunity to enjoy these superfruits in abundance now & to stock up for the winter months. And bonus… buying in bulk, we can cut down on costs & packaging!

Kathryn & Paul are at the Milk Market every Saturday all year round with fresh fruit when in season, jams & juices in the cooler months.

Claire looks after the markets in Cork usually from mid-May when the strawberries begin to appear until mid-October. Cork markets are: Midleton, Wilton, Mahon Point, Douglas & the Coal Quay. For exact dates & what’s available keep up to date by following on Facebook