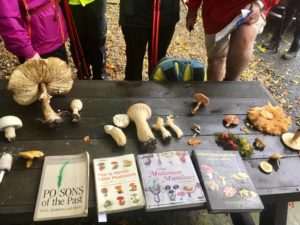 A sample of woodland fungi and books before we set off. Edible varieties on the left, unedible to the right.

Today I joined the Slieve Bloom walking club (www.slievebloom.ie) for a guided Fungi hunt around Glenbarrow in the Slieve Blooms. Having to shamefully follow directions from some American lady on my phone, I found Glenbarrow carpark at the opposite end of my home county, Laois. The weather was certainly not great, but I’m a big believer that when it is misty and overcast outside, then a walk in a woodland is perfect as you get shelter and the healthy, clean moist air seems to be heightened even more!

John & Gloria emphasised that they are not professional mushroom experts/foragers at the beginning of the walk, merely keen amateurs and along with other knowledgable and interesting walkers in the group I have picked up a thing or two when it comes to all things fungi! 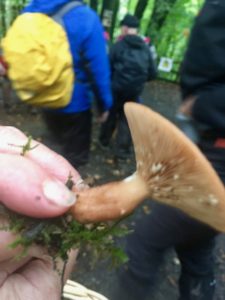 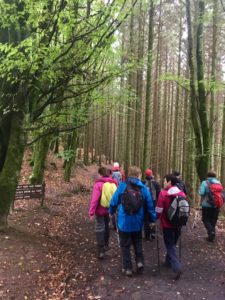 Beginning to make our way through Glenbarrow forest 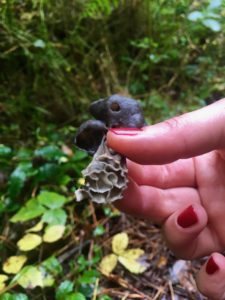 This was identified as the Black Hell Bell which is another version of the White Hell Bell. It was agreed that these are an edible variety but they really are not that worth it as they have a rather rubbery texture and not much flavour. I thought the colour was cool and the stem of the black version was far more eye catching than any white examples we came across. 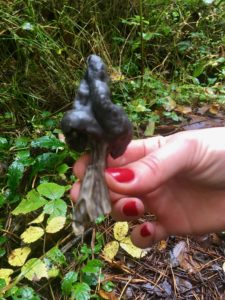 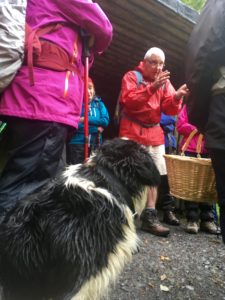 John Scully, along with Gloria Carter led this walk and as you can see, he had everybody listening intently. 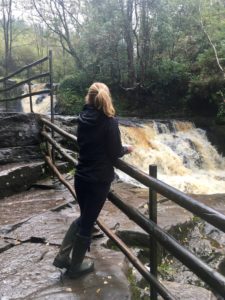 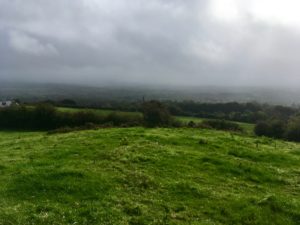 The weather wasn’t exactly the best day of the year but it was perfect for padding through soft and still woodland! 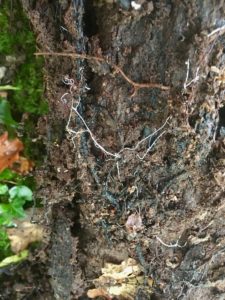 The fungi mycelium. Where it all begins! When 2 mycelia come together, then they recreate to form fungi! 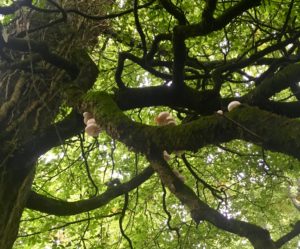 It’s not just on the ground you find fungi!

When it comes to identifying fungi, by looking around to see what tree it is growing on or near, this will help narrow down identification. I learned that it is not just on the ground the fungi appear, but on the branches of trees and knocked down logs too. 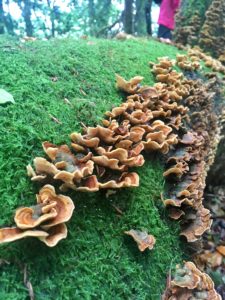 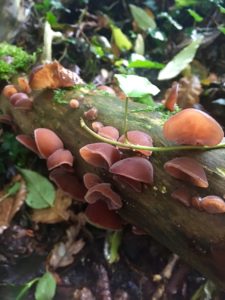 These fungi are today known as Judas Ears and are edible. They look cool; very smooth, translucent in some light and add an interesting texture to dishes but not so much flavour. 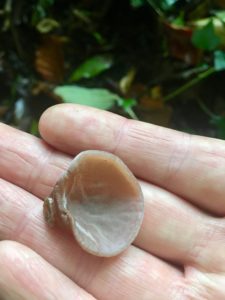 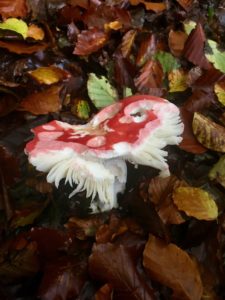 The Beech sickner. You may probably guess by the name that it is found under beech trees and it is not going to be a top culinary choice, with its bright colour, white gills and name, this is NOT EDIBLE! 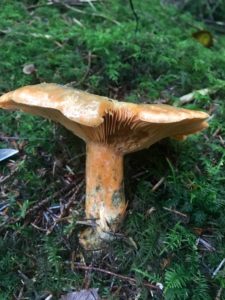 On the other hand, this Saffron Milk Cup is edible and I took a few of these home in my basket. These have the most fragrant perfume and if you close your eyes and smell it’s cap, it gives off an apricot aroma! 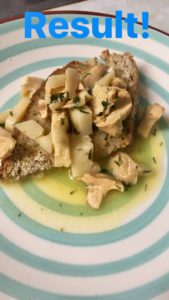 When I got home I gently rubbed the mushrooms with a damp cloth to rid them of dirt. I then chopped each of them up into slices – I wanted to make sure there was no creepy crawlies beginning hibernation already!! Then just put some bread in the oven to toast, put a good generous slice of butter in a pan and went out to pick some thyme in the garden. Pick the thyme into the butter and inhale that delicious smell, then slide the mushies in and toss until softened.  That was supper sorted for Sunday evening!

Sometimes you may just happen upon some great foraging, like the time we were taking a shortcut through some woodland to escape the rain & I got distracted eating all the yummy wood sorrel I found on the woodland floor! That was walking to the highest point of Laois & Offaly, ArdErin & you can see read about it here.